The following are some examples:

I have been the owner multiple times of a chain of Garry's Mod Trouble In Terrorst Town servers, starting with Paranoia TTT, then Oasis TTT, then Ant Farm TTT. It ended with a short sprint of my own server built from the ground up to succeed Ant Farm named Eleboog. It didn't last very long, but I learned invaluable experience that I can use in my later computer science adventures. While I was the owner of each of these servers, I was also the lead developer, managing the balance of weapons and experimenting with new features such as new weapons, a haste mode round time cap, improvements to the PowerRounds gmodstore addon, and more.

Speaking of Garry's Mod, I have also released a variety of Garry's Mod addons. My most recent project is taking a part of a previous addon that I made and releasing it as its own addon: a customizable crosshair for TTT. I had to wrangle a few bugs, but I am really proud of how I set up the config menu and the preview that's inside it. I have also done the same sort of thing with the vanila HUD of TTT, allowing players to customize it by changing its color scheme, enabling a "minimal" HUD option, etc. I think I am going to continue developing these two addons to be really cool additions to vanilla TTT. 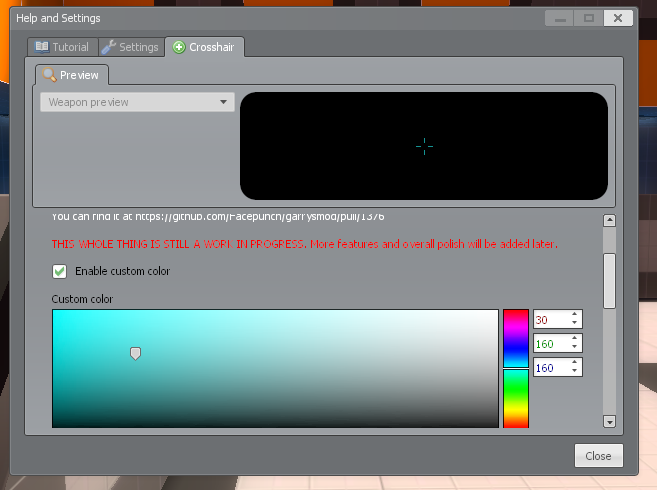 The config menu for the customizable crosshair. Notice the preview on the top of the window that lets you see what changes you are making in real-time. I figured this was necessary because the config window in TTT opens right over your crosshair, and moving it aside to be able to view your changes could get annoying pretty quick. 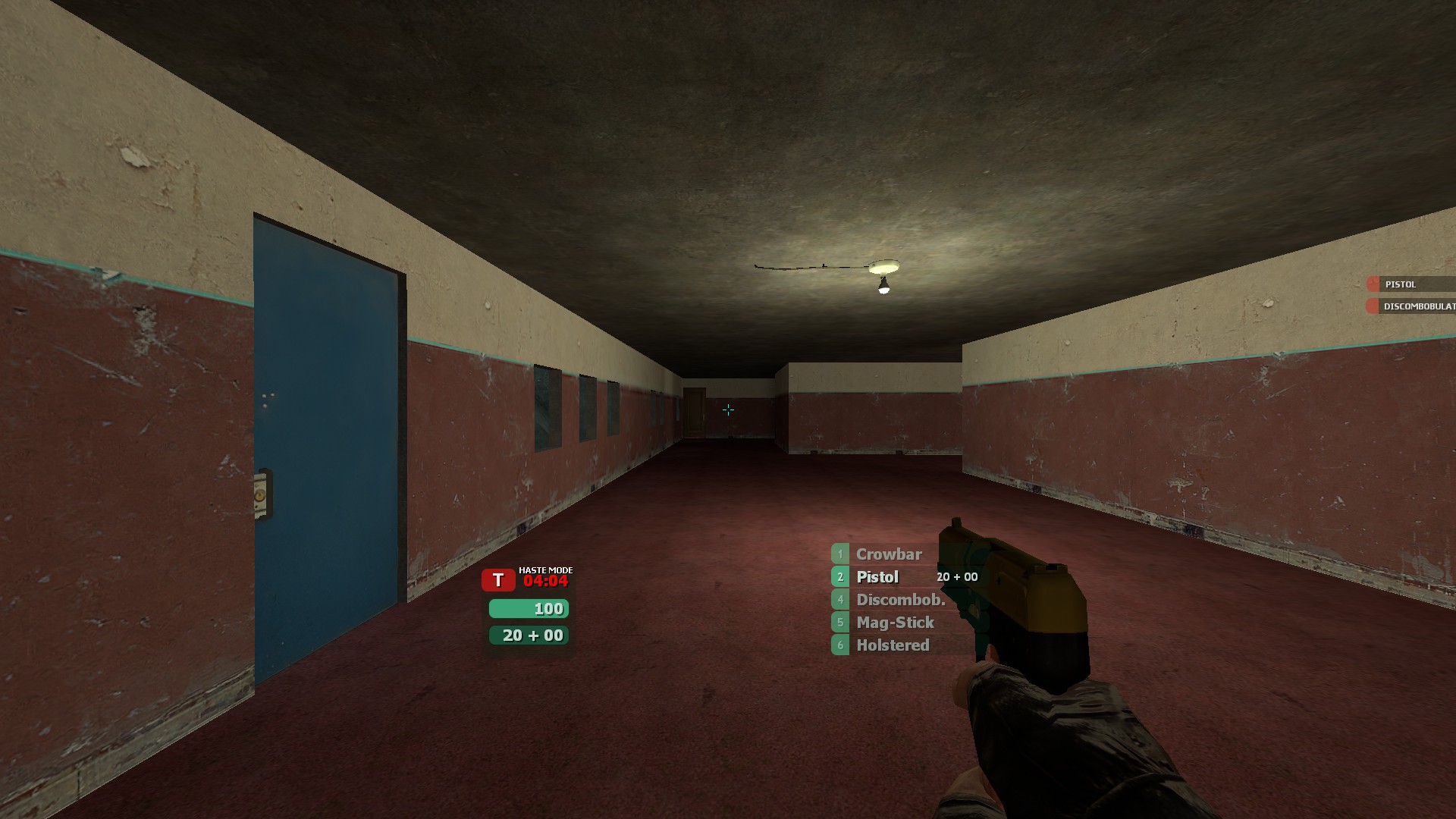 Some of the changes you can make to the HUD with my hud tweaker addon: custom color scheme, hud "safezone" positioning, "minimal" mode to condense hud elements

I have also been uploading edits of other talented creators' traitor weapons to be more balanced and streamlined. I always credit all original creators of the addons I edit because I do my edits out of respect for the vision they had when they created the original addon. I have also am working on a TTT version of rp_bangclaw, an enhanced smoke grenade that stuns players who get caught in the blast zone, and a port of the HL1 long jump module as a T weapon.

I am also proud of the edits I made to PowerRounds, a paid addon on the gmodstore that has been out of active development for a while now. I was frustrated that you were forced to use the GUI to control the addon, so I made console commands that you could use to vote or force power rounds instead. I intend on making chat commands for these functions as well. If anyone wants to know how I added console commands, hit me up.

I have worked on multiple Source SDK modding projects, including not only my own but also ones directed by others.

The most memorable one I have worked on was Velocity Brawl (originally titled Ricochet: Evolved), a reinterpretation of the (not-so) classic GoldSrc game Ricochet. I had some disagreements with the head of the mod, so I left. However, to this day, one of the features I created that I am most proud of was a mechanic named "knockback" which essentially took Half-Life Deathmatch's Gauss Jump mechanic and made it a core movement option. Also, to this day, the head of that mod touts that feature as one of the main selling points of the project (which has since moved on to being developed in the Unity engine). I find that kind of humorous.

Disclaimer: Don't try to go harass this guy. I've talked with him recently and he's alright. He's also working on another mod project, so go check that out if you're interested. 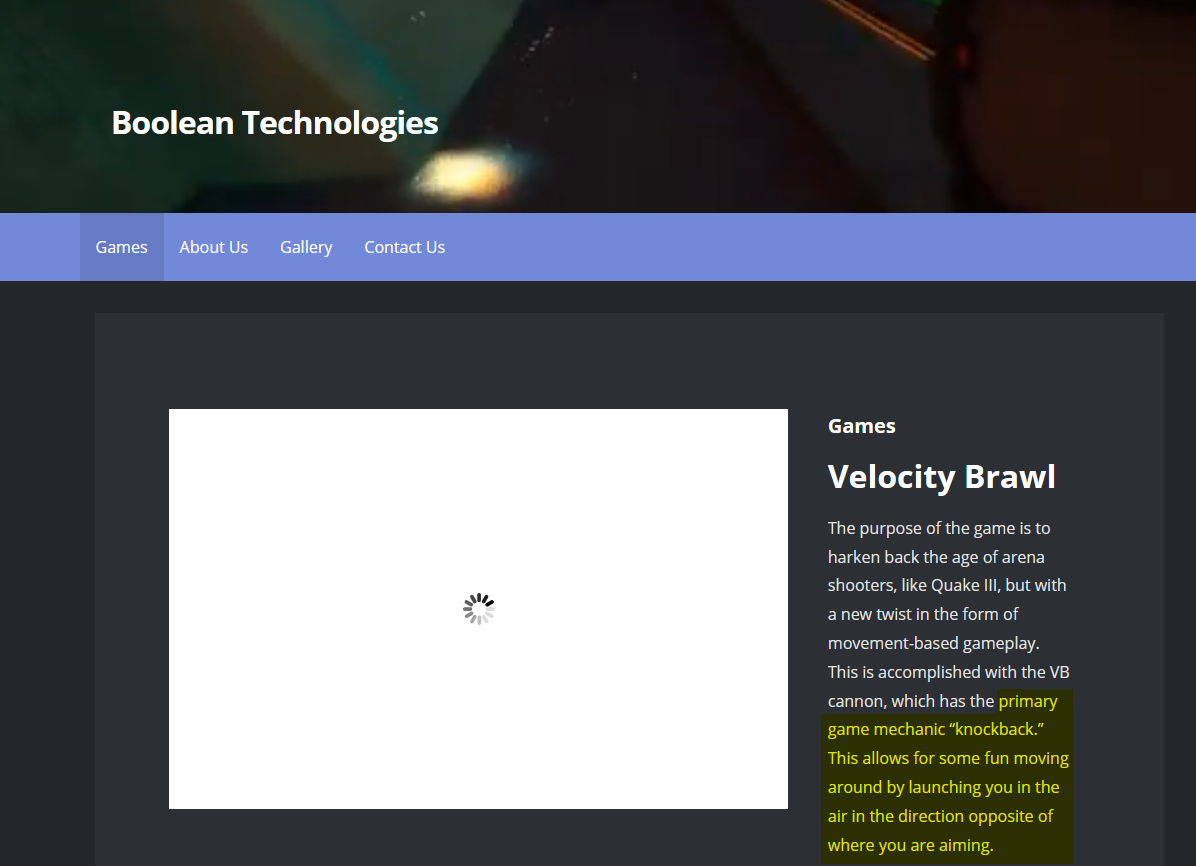 The current main page of Boolean Technoligies, the creator of Velocity Brawl's dev team. The quote I talked about is highlighted: "[Velocity Brawl] has the primary game mechanic 'knockback.' This allows for some fun moving around by launching you in the air in the direction opposite of where you are aiming."

I ended up with a copy of the source code of the mod after I left, so I have been tinkering around with it ever since I left, trying to see if I could turn it into a fun experience. I've been on and off with it forever, but if anyone has any interest in this, hit me up. I have mostly added visual flair and a couple new mechanics so far, but I definitely need to flesh it out more in order to make it something people would want to play again. 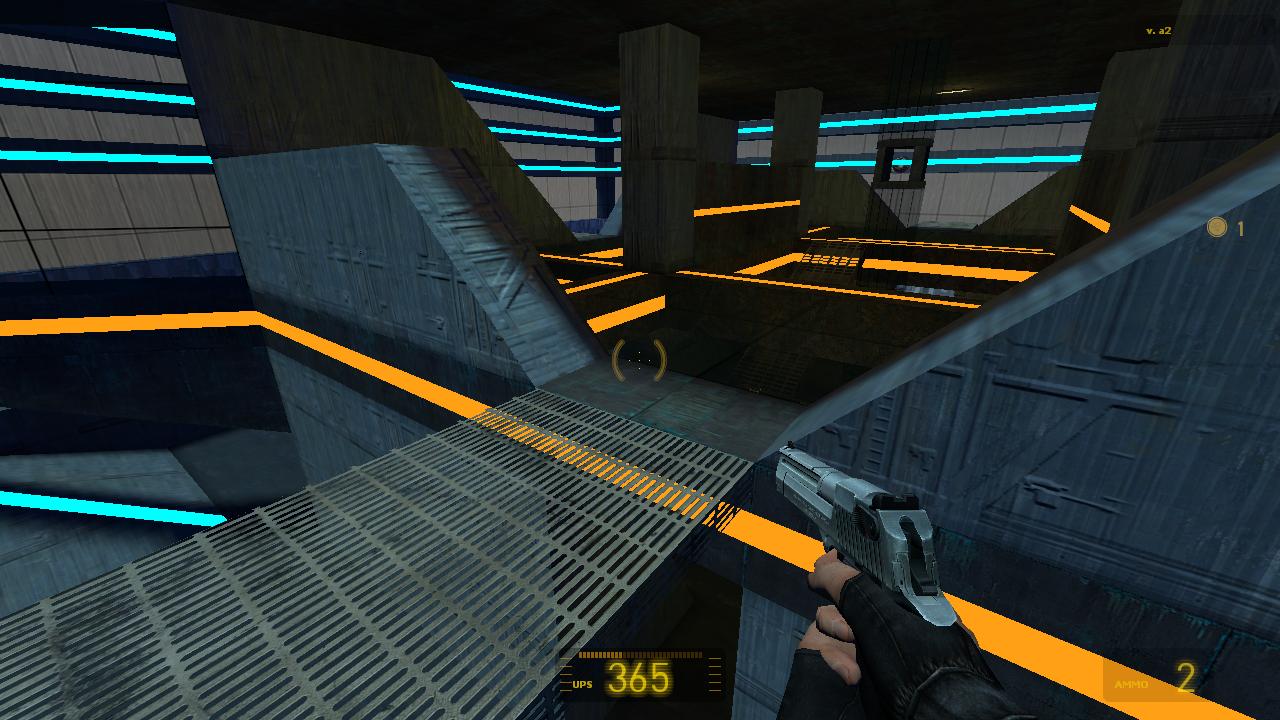 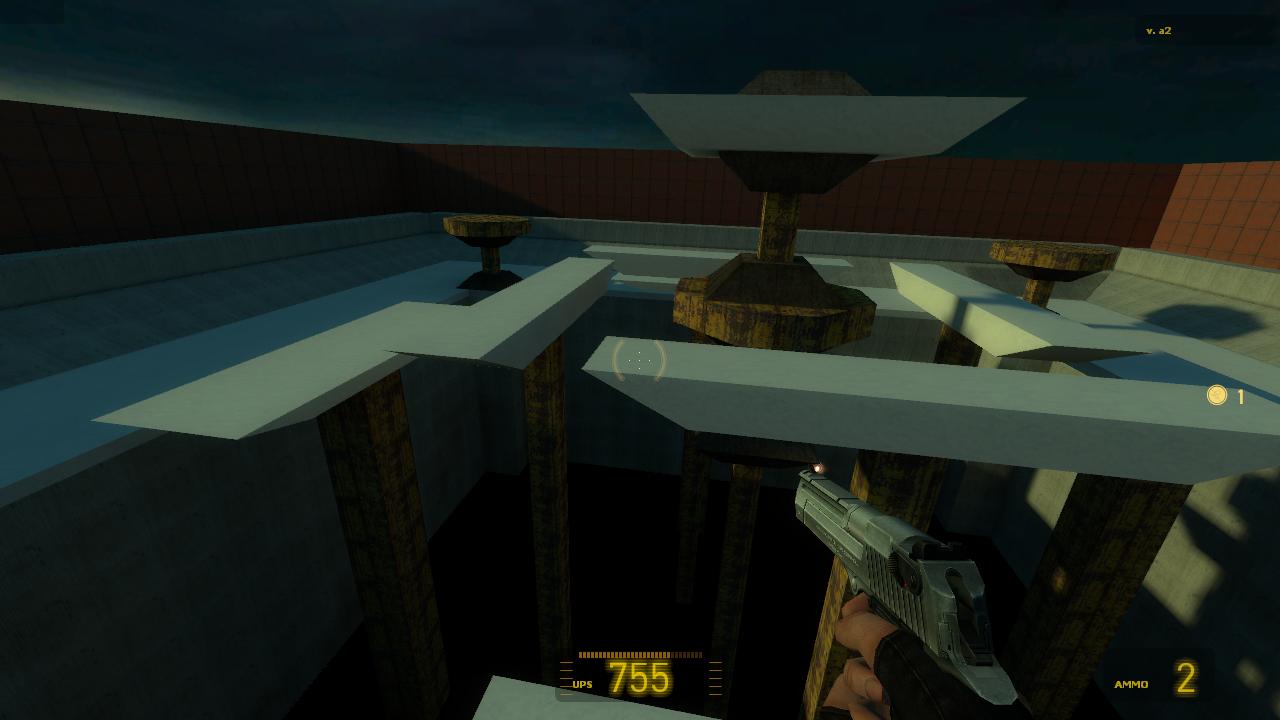 Some random screenshots I took of my fooling around so far.

I also have worked on Source mod projects of my own. There are two that I am most proud of, one of which being Skirmish. Skirmish was my attempt at making a hybrid of Counter-Strike and Half-Life 2: Deathmatch. It had a loadout system where you could choose what weapons you spawned with. I also edited the hud to be more "competitive", with inspiration from the many custom TF2 huds out there. I also threw in an over-the-shoulder third-person camera because why not? 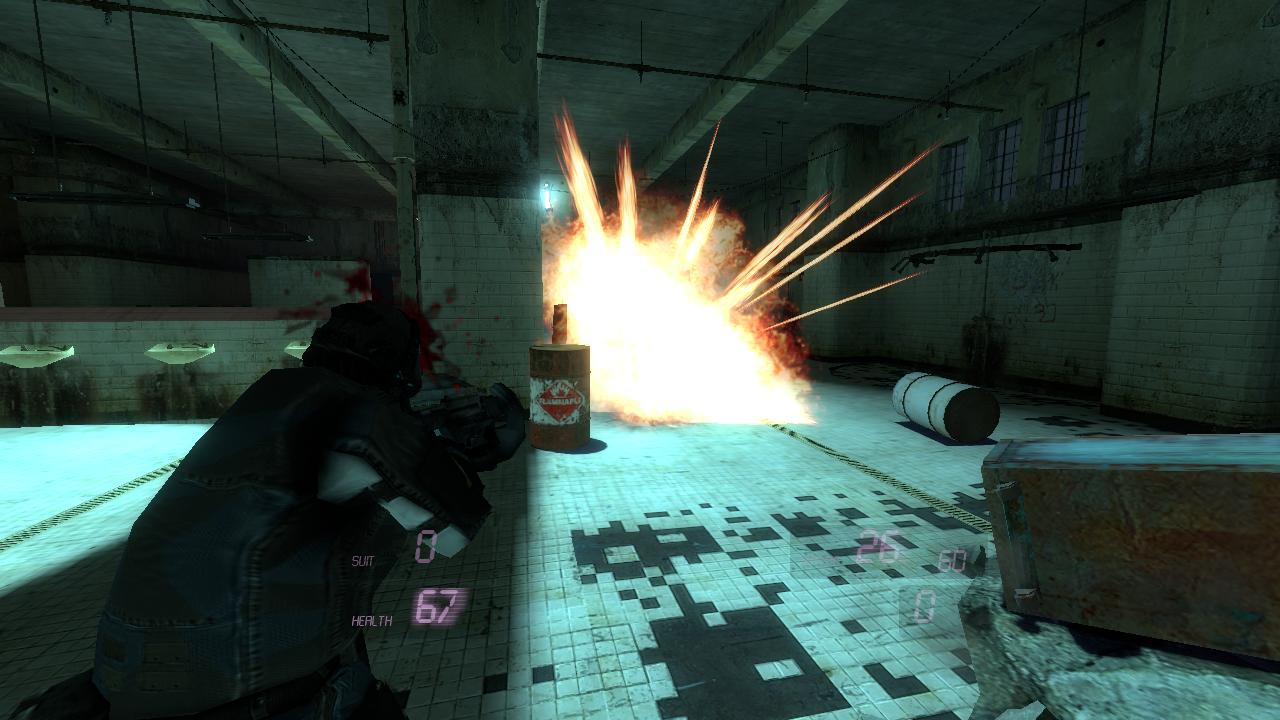 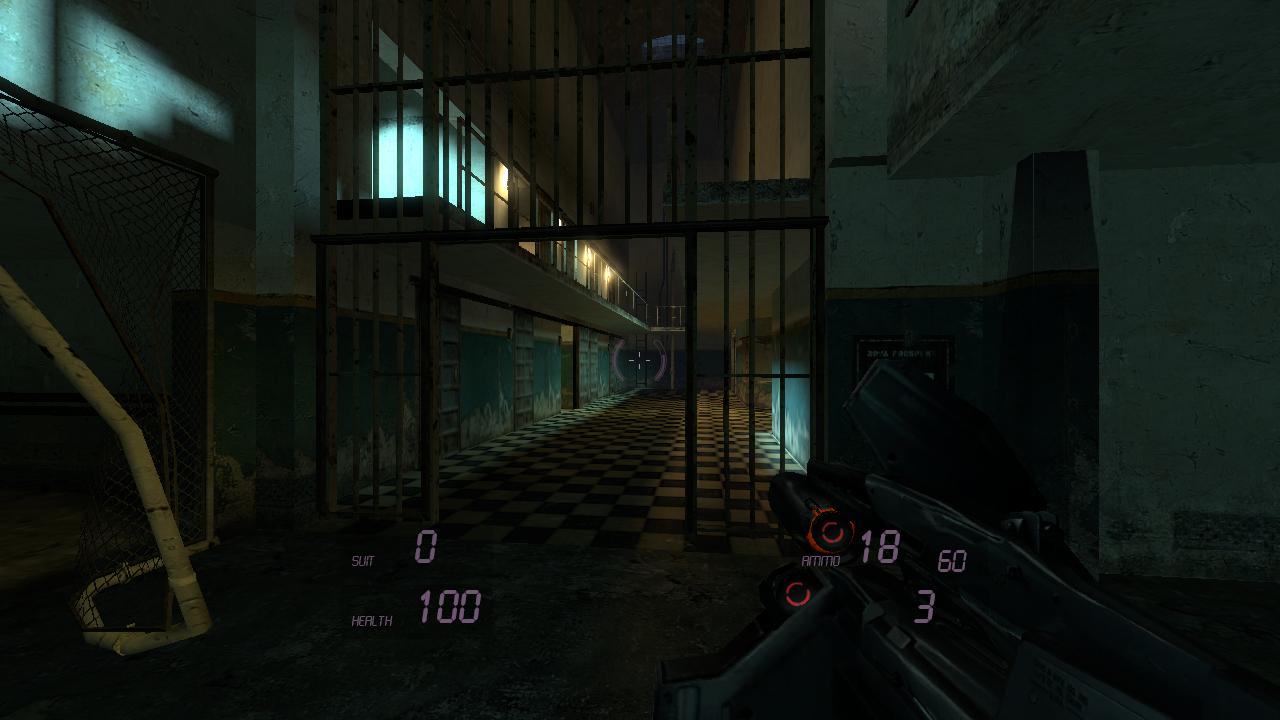 Some pictures of Skirmish as it currently is now. Notice the over-the-shoulder camera & the hud. I had more screenshots at one point, but my computer corrupted my user profile and all those screenshots have been lost. Blame Bill Gates.

This survival horror mod is my most recent project and currently the most active in development. It was originally named "Another Survial Horror Mod," and that will probably still be its codename-thingeymajiggy, but I've finalized the setting of the mod and a bunch of concepts about the story, so that's why it'll be named "Ravenholm." It is heavily inspired by the first three Resident Evil games, and I plan for the game to be HL2 meets Resident Evil with a bit of Silent Hill mixed in to taste. 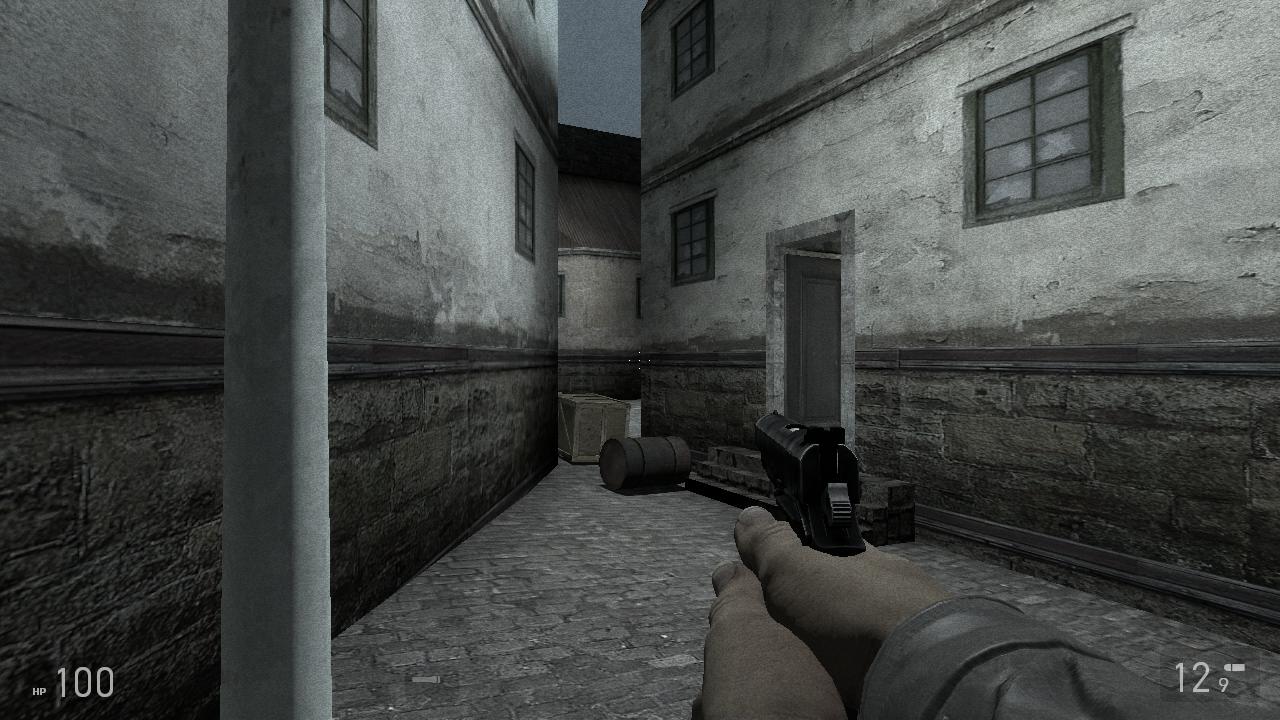 A very early build of Ravenholm. I've made a bunch of test maps, and this is the closest one I've gotten to HL2 Ravenholm's style. I probably need a better mapper if I want to get serious about this, but... naaaaaaah.

I plan to add an inventory system built for mouse gestures: you will be able to double-click items to use/equip them, drag one item onto another to combine them, and drag items out of the inventory window to drop them. The main reason I want my inventory to function this way is because I want to improve upon the inventory system seen in an earlier survival horror mod, Underhell. You had to right click a lot with that inventory, and that just didn't rub me the right way. Also, one of my friends, Fesiug, is contributing models and animations to the mod with a Vietnam War theme. I really like the work that he has done, and I hope I can continue working with him on this mod since he has given me great advice on the programming side of things. 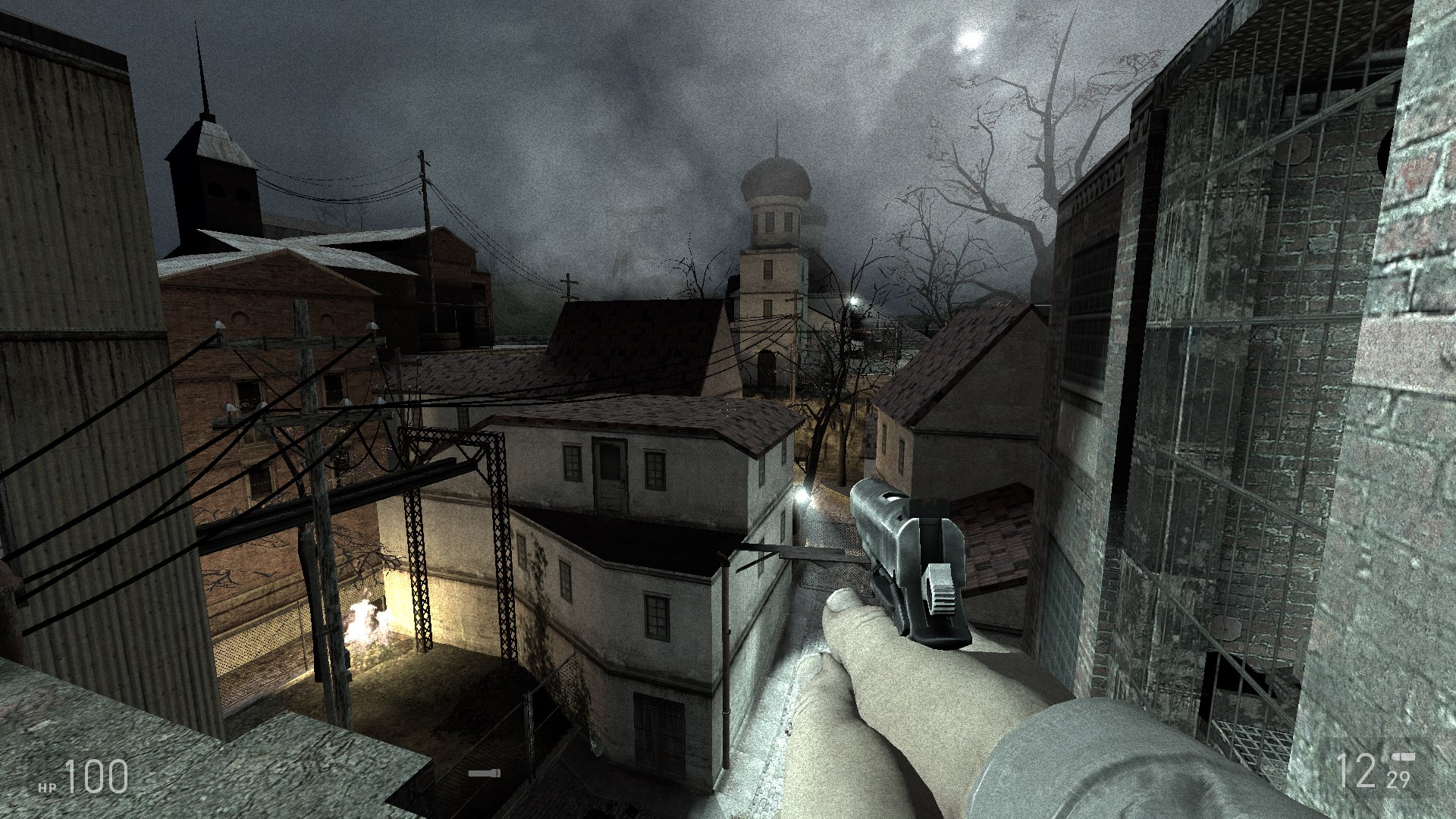 An earlier build of Ravenholm where I was testing out a shader I made by loading into HL2 Ravenholm. I really like it, though I need to edit it so it's more customizable.

Probably the most obvious example of my coding adventures is the website that is currently searing into your eyeballs right now. I am extremely proud of this website: it feels like a distillation of who I am into a visual form.

I have also done web development work on my TTT server's website, along with some other miscelaneous projects.